Distraction Series 10: A round-the-world armchair vacation with Arakawa and Madeline 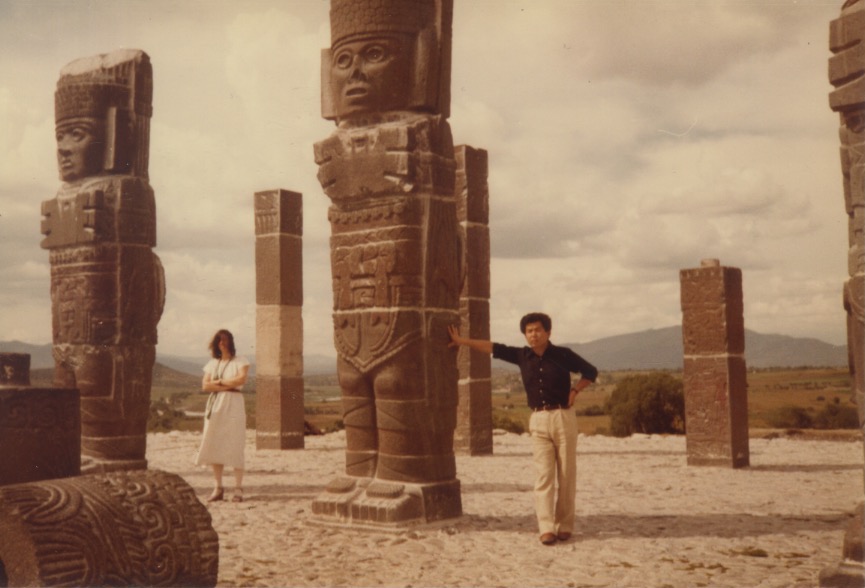 Given the current limitations on travel, Distraction Series 10 is here to bring you on a round-the-world armchair vacation with Arakawa and Madeline. From Mesoamerican ruins in Tula, Mexico, to Italy, France, Japan, and various locations in New York state, join us as we travel through time and space from the point of view of our two founders. We’ve pulled around twenty photographs from our archive for your viewing pleasure – scroll down for the images with descriptive captions. Winter, Spring, Summer, and Autumn, you’ll find Arakawa and Madeline posing, taking photographs, examining their environment, and planning their day over breakfast. Enjoy! 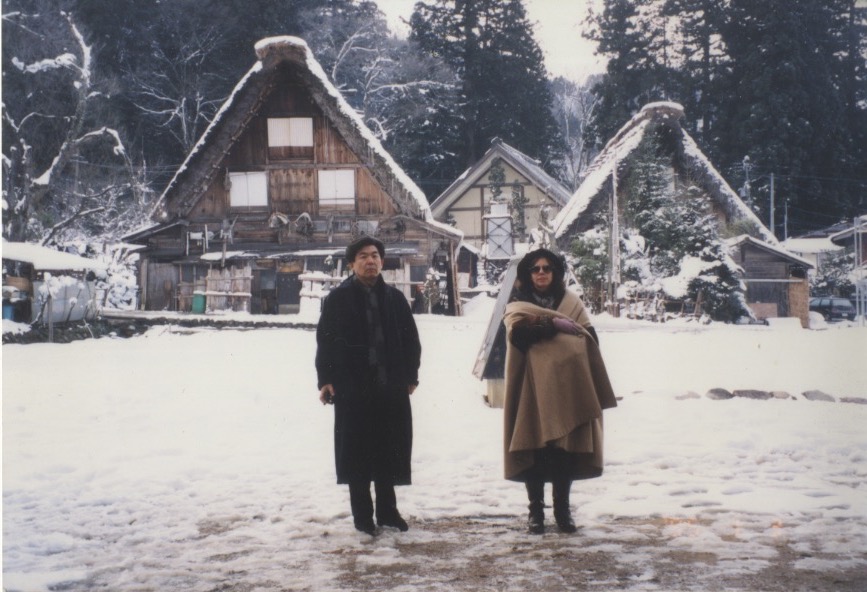 2. Arakawa and Madeline all bundled up in front of snowy, thatched cottages in Japan. 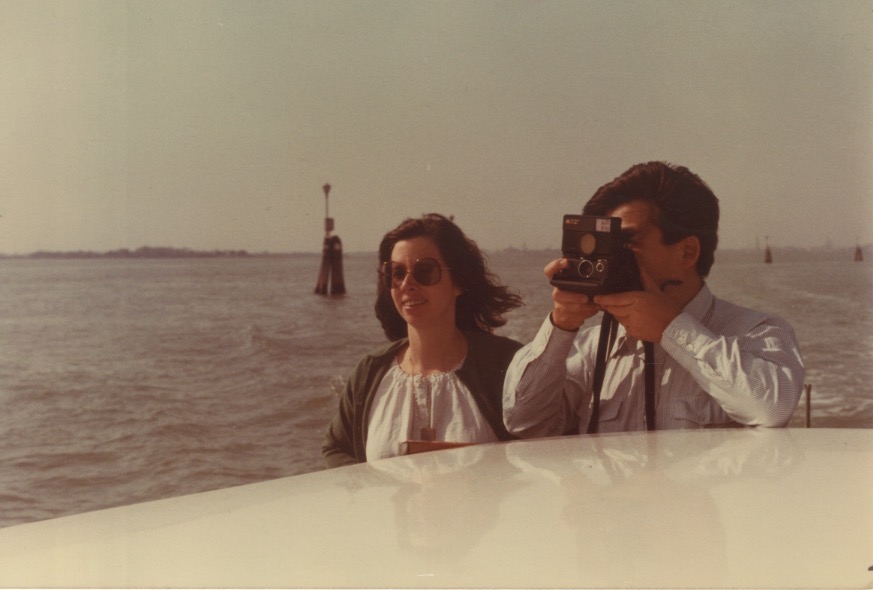 3. While Arakawa photographs his environment from a boat in Venice, Italy, someone else turns the lens on him and Madeline. 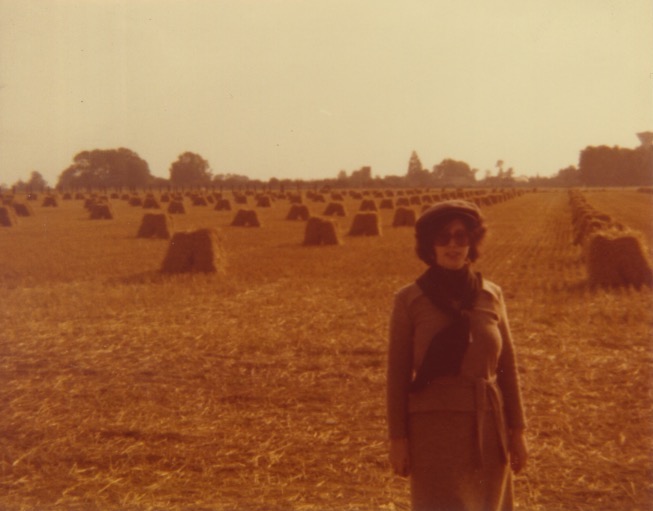 4. Madeline poses in front of a field of haystacks in France, as if she has just stepped into a Monet painting. 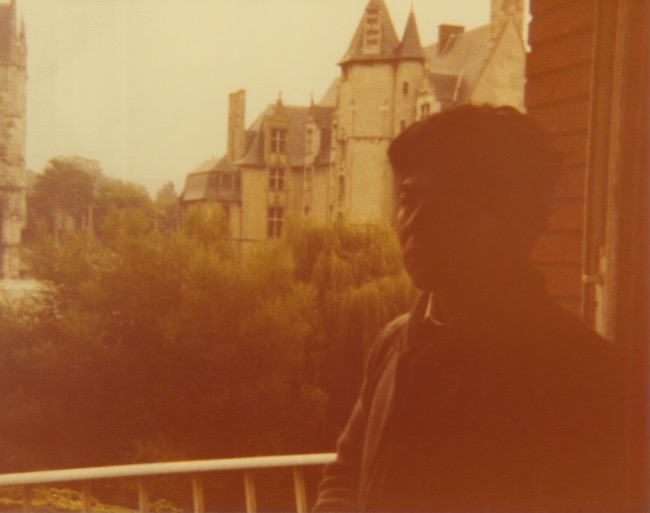 5. Arakawa looks pensive in the shadows against the backdrop of a French castle. 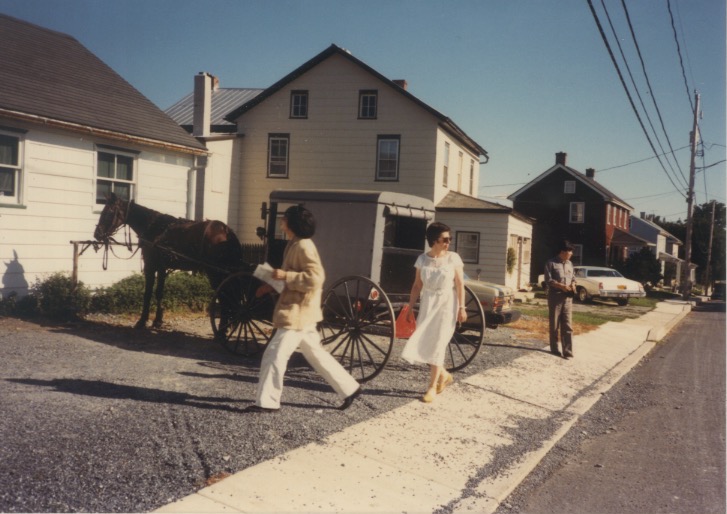 6. Madeline and Arakawa both turn to look over their shoulders as they pass in front of a horse and buggy, U.S.A., September, 1986. 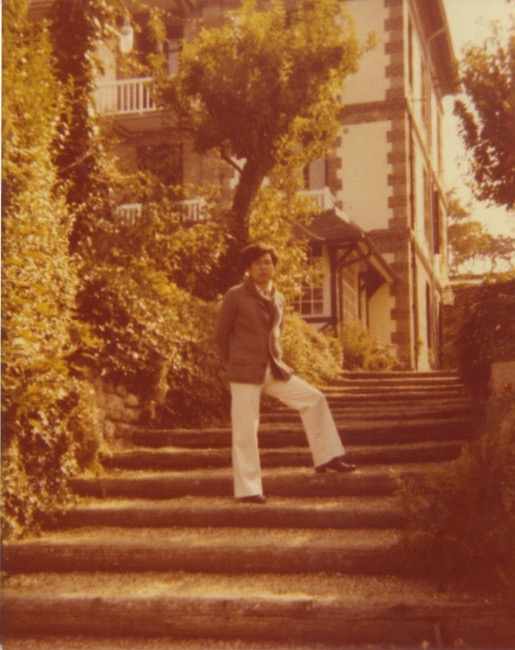 7. Arakawa strikes a pose on some picturesque European steps. 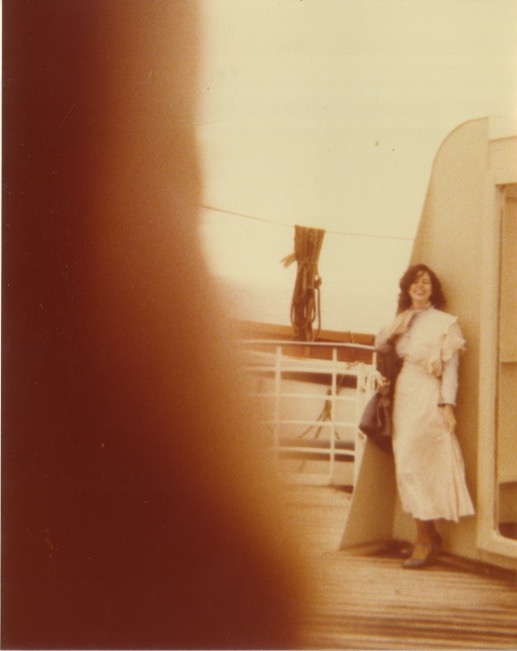 8. Madeline poses in a beautiful, white dress on a boat. Unfortunately, a finger was covering part of the lens – something one wouldn’t discover until the photographs were developed after the vacation was over. Many of us might have experienced this in the last century especially! 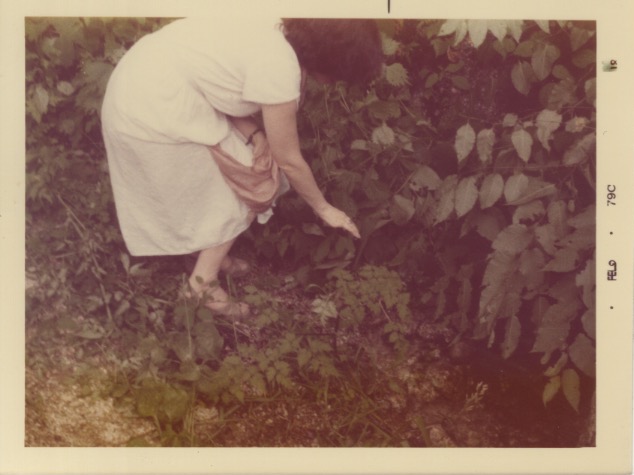 9. Ever curious, Madeline examines some leaves on a trail in Japan, 1979. 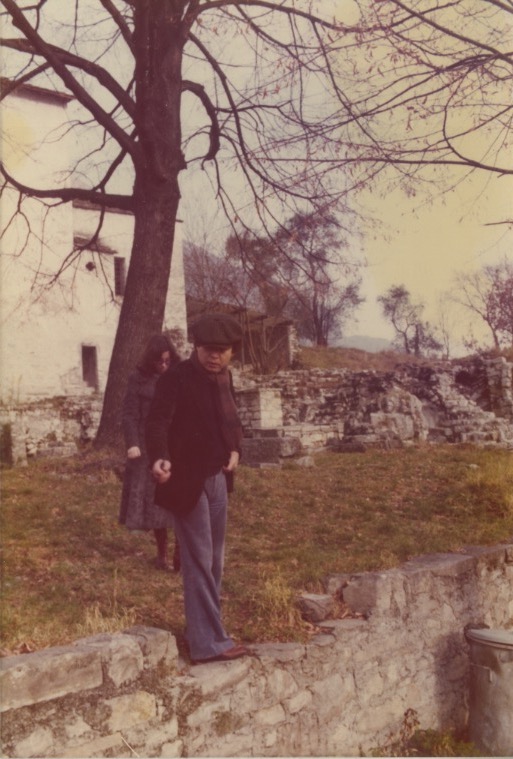 10. Arakawa and Madeline shift their gazes downward as they come to a standstill before a stone wall in Upstate New York. 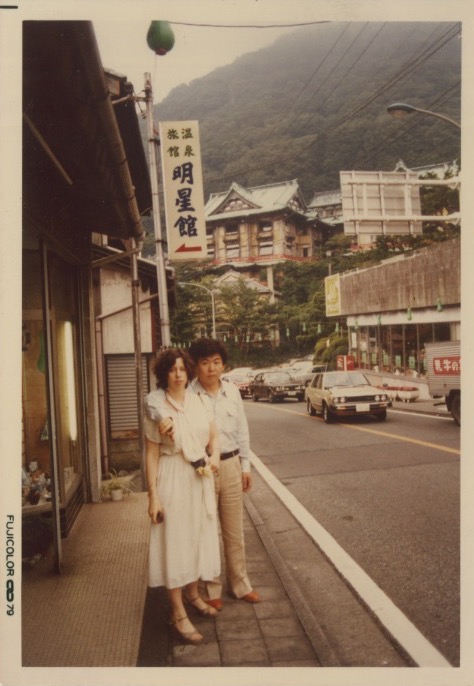 11. Madeline and Arakawa pose on the sidewalk in Hakone, Japan, 1979, with the famous Hakone Fujiya Hotel and a mountain in the background. 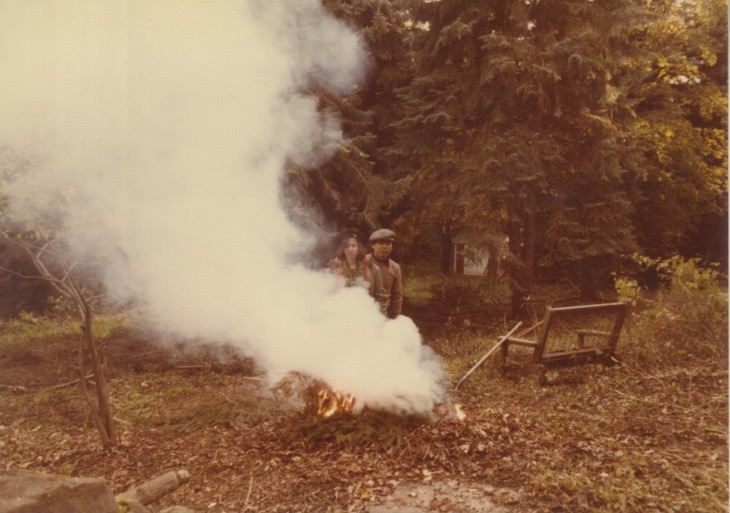 12. Madeline and Arakawa stand behind a thick cloud of smoke billowing from a camp fire in Upstate New York. 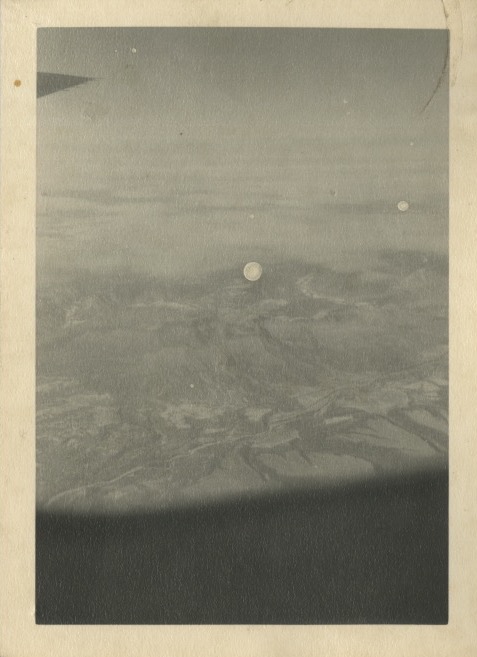 13. Who can resist the urge to take a photograph from an airplane window? A “mistake” in the development of this photograph gives the impression of a full moon hovering over a mountain range, with a planet floating nearby. 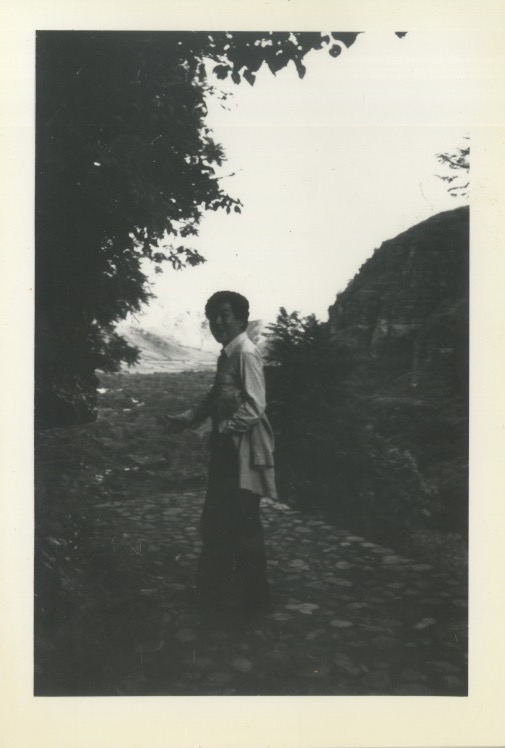 14. Arakawa turns to look over his shoulder as he walks along a scenic path near Mayan ruins. 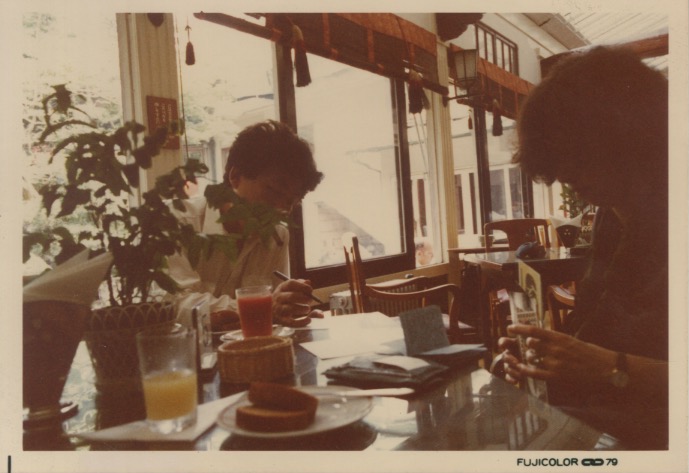 15. Arakawa and Madeline writing and looking through pamphlets as they enjoy breakfast at The Fujiya, a French restaurant at the Hakone Fujiya Hotel in Hakone, Japan, 1979. 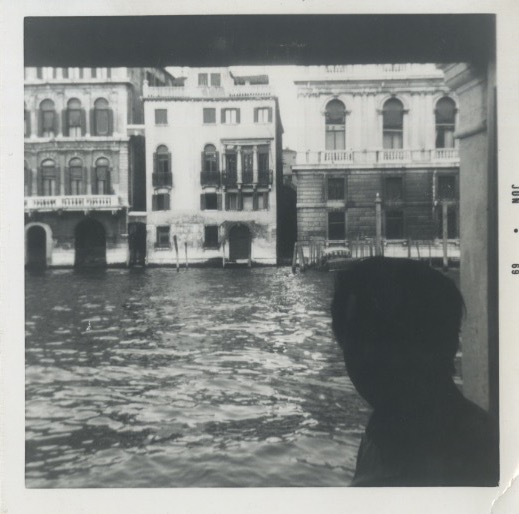 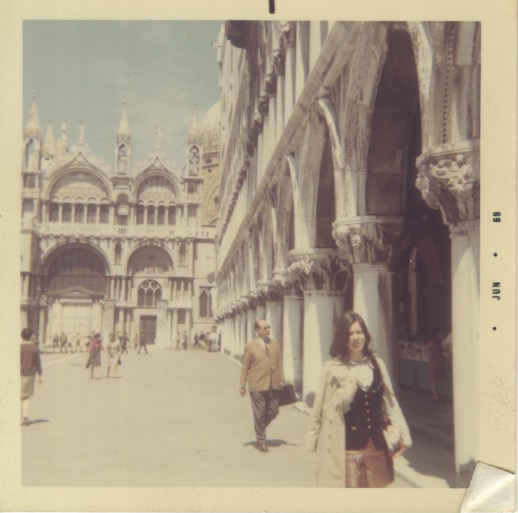 17. A fashionable Madeline walking in Venice, Italy, June 1969, with a trench coat draped around her shoulders. 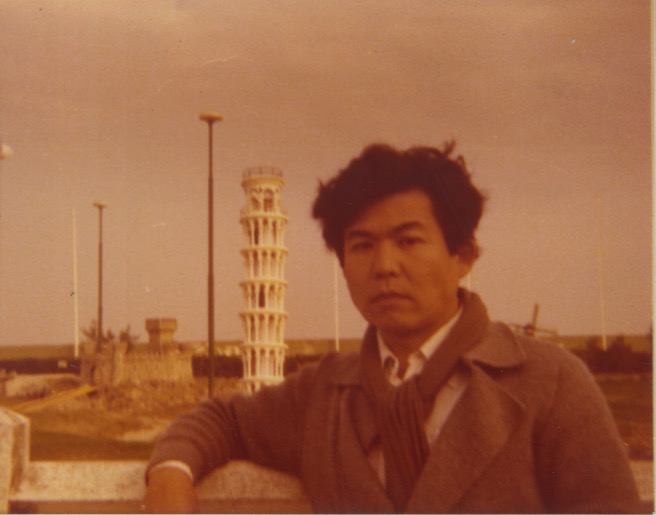 18. Arakawa leans against a low wall with a tower in the background. 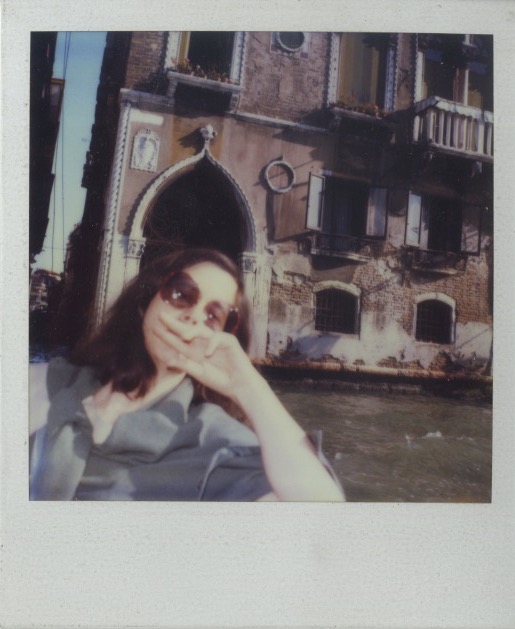 19. Madeline relaxes in a boat on the canal in Venice, Italy, her head perfectly framed by an archway. 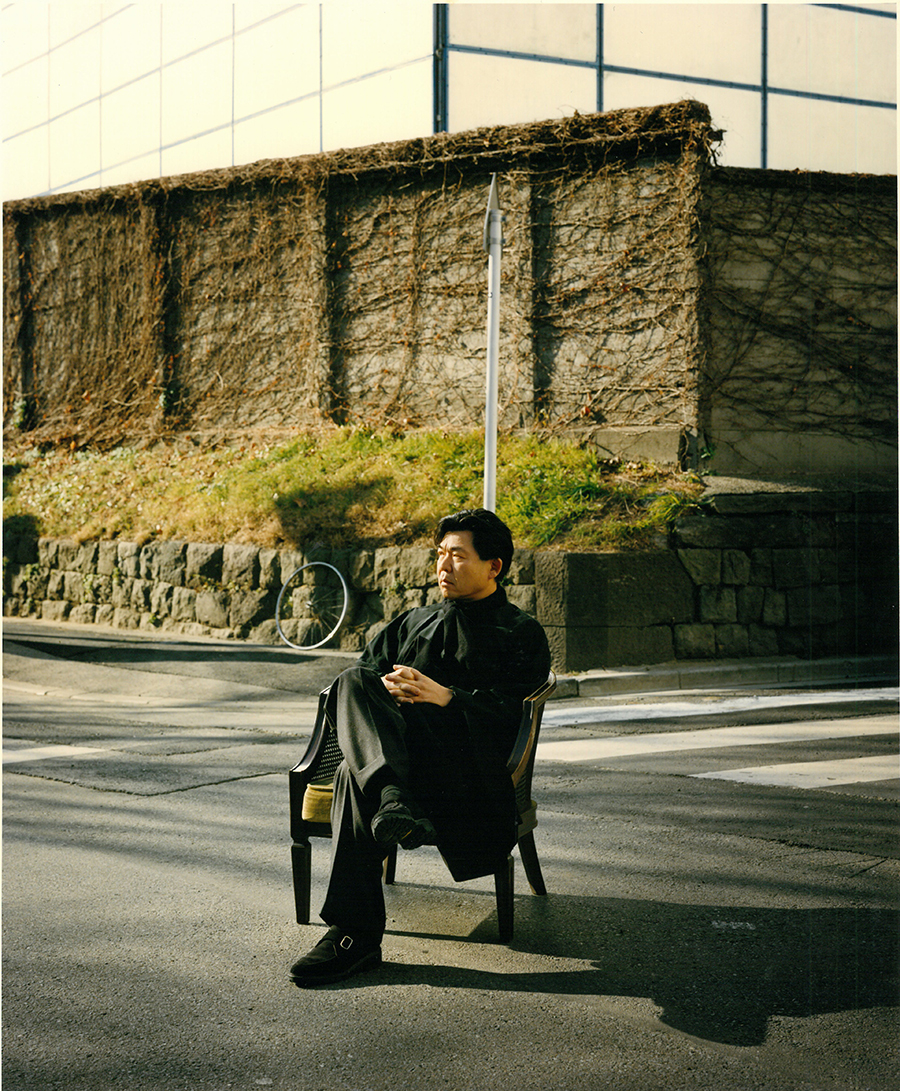 20. Arakawa sits in an armchair in the middle of an intersection in Japan. A bicycle wheel to the left and the grid lines of a building above, partially frame him in references to Modern art.

21. Negatives from Arakawa and Madeline’s trip to Tula, Mexico, bring back memories of how we used to take vacation photographs. 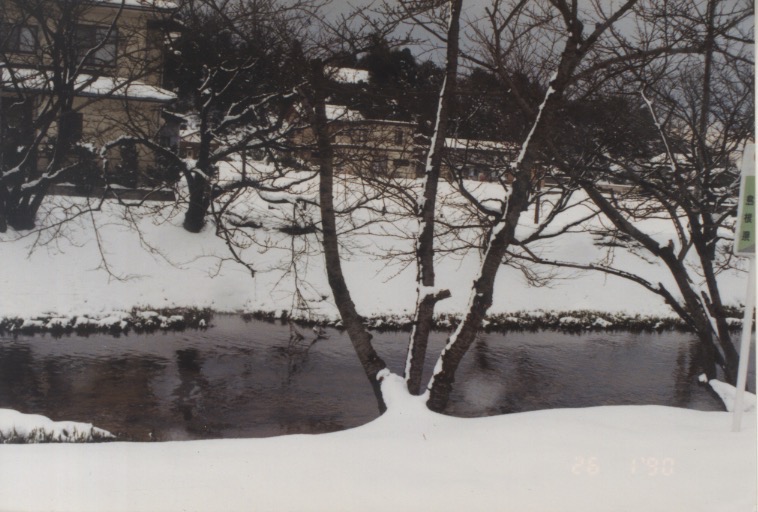 22. A peaceful winter landscape. This is the type of photograph that we all wind up taking in multiples, especially now in the digital age, for while we cannot bare to pass by such beauty without capturing it, our attempts rarely convey the pure majesty of being in nature. January 26th, 1990.