Ambiguous Zones 1: A Self-Portrait Near the Ocean

At the Reversible Destiny Foundation, the start of summer brings with it an air of celebration for Arakawa’s birthday on July 6th, when he would have turned 85. This year, it also heralds a change in our monthly newsletter. We started the Distraction Series at the beginning of the pandemic when many of us were adjusting to being at home full time. As things begin to open up at various rates, we think it is time to move onto a new monthly newsletter, Ambiguous Zones, that will continue to explore various themes related to Arakawa and Madeline Gins.

For the inaugural AZ newsletter, we took summer and Arakawa as inspiration for a brief look at the ambiguous zone of the beach, as seen in Arakawa’s 1967 painting A Self-Portrait Near the Ocean. We hope this leaves you with something to think about as you take your own selfies on the beach this summer!

As summer officially begins, Arakawa’s A Self-Portrait Near the Ocean, 1967, becomes a title that could be applied to many a photograph we will see this season. This painting also seemed like a perfect choice for AZ1, since we can consider as ambiguous zones both the snapshot quality of the moment depicted and the setting – a beach.

An ambiguous zone lends itself to an infinite number of interpretations when considered from the perspective of Arakawa and Madeline. For example, in the late 1960s, Arakawa wrote: “What I want to paint is the condition that precedes the moment in which the imagination goes to work and produces mental representations.” This in and of itself describes a type of ambiguous zone – somewhere right between an initial sensation and the coding of this into perception. It takes on an additional layer of ambiguity in another sense. By recording this extremely short duration between sensation and perception on canvas, Arakawa has allowed it to coexist with an eternity (or however long the painting lasts)—it is therefore both a moment and an eternity at once. For further reading, Deleuze and Guattari’s discussion of the percept, affect, and concept is highly relevant here.[1] 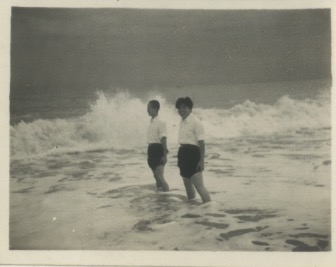 Turning back to the painting in question, we see both things at play. By providing merely a trace of an outline of a person, in this case supposedly of the artist himself, Arakawa provides the viewer with some open-ended information that allows them to fill in the rest of the details using their imagination. The label, “sands” allows us to infer that Arakawa is on a beach, although one might picture a sand dune instead. Sand itself is not earth and no longer rocks, so exists in a kind of in-between, albeit very long, stage. If these sands make up a beach, its size will change as the tide goes in and out. The beach is a location of leisure but also of labor depending on how it is deployed.

The painting itself has a typical tripartite structure, with the background made up of the sky delineated by a silvery-grey band with the word AIRPLANE and an arrow pointing to a rounded shape going off the canvas, and the foreground marked off by a white band with another rounded shape labelled as BICYCLE. Without the labels of AIRPLANE and BICYCLE we wouldn’t have any real indication that these bands are a part of the space of the painting. Does the bike belong to Arakawa? Is the plane heading to or from JFK airport? 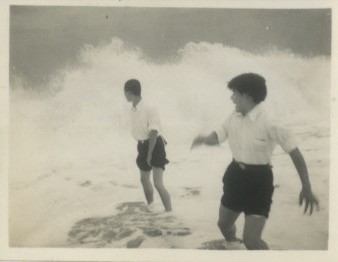 The figure of Arakawa, anchored by labels for HEAD and FOOT, exists in the midground. Between these labels, along where we might imagine the body to be, we find a number of rather unexpected words: SHIP, AIR, TINFOIL, and HAIR. Do we understand the ship to be somewhere behind the figure? Is the air around him? In front of him? Being breathed in or out by him? It doesn’t seem to be ruffling his hair, but maybe he is wearing a hat? Is the tinfoil covering a sandwich? Is the hair on someone else’s head? To the right of the figure, SANDS is stenciled toward the bottom and OCEAN toward the top. Arakawa’s feet are clearly in the sand and if he is standing then the ocean and presumably the ship would be behind him, but these are really up to the imagination, since even if Arakawa is standing in the water, he would still technically have his feet in the sand. Could it also be possible that he is reclining? Also to the right, a round object labelled BALL is moving through the air, over ocean or sand.

The colored lines that divide the midground may offer additional clues as to the delineation of space. The ship is in the same band as the ocean, beneath this, the ball is on the same band as the air, followed by the tinfoil (in Arakawa’s hands?), and finally the hair, feet, and sands are all within the lowest band before the foreground. Perhaps the fact that the head and feet are outlined in the same color suggests that they are in the same plane at the front with everything else understood to be receding back into space the higher up it is marked on the canvas. Does this work for the tinfoil? If the tinfoil is behind Arakawa, it would be blocked from view. Just when the viewer thinks they have understood the rules of perspective within Arakawa’s composition, the tinfoil begins to re-write them. The lines dividing the midground into sections, or zones, appear to be doing so with regard to both height and depth. As in many works by Cézanne and Picasso, we might understand that we are getting two views—looking down (especially if the figure is reclining) and looking out (especially if the ship is in the ocean). The ambiguity abounds.